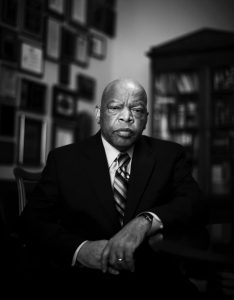 On behalf of The Urban League of Philadelphia, I am deeply saddened by the passing of one of the greatest Americans of my life, United States Congressman John Lewis.  I am honored to bear witness to his unwavering commitment to civil rights and social justice.  Growing up, I was in awe of how this young man stood among the civil rights giants as he passionately advocated for equality and justice for all.  As I think about the many times I was graced by his presence, all I can bestow is endless gratitude to a man and a hero that sacrificed his own health to fight for me, my family, and my community.

Born to sharecroppers in a small town in Alabama, Representative John Lewis recognized early on the need to address the segregation in his community.  From his start as an organizer in Nashville, Rep. Lewis would go on to lend his unwavering leadership as one of the original thirteen Freedom Riders and served as chairman of the Student Nonviolent Coordinating Committee (SNCC).  Through SNCC, Rep. Lewis joined civil rights icons Whitney M. Young and Dr. King as one of the “Big 6” of the March on Washington. “Bloody Sunday” would be synonymous with Rep. Lewis as he led hundreds of peaceful marchers across the Edmund Pettus Bridge in Selma, Alabama while surviving a fractured skull at the hands of Alabama State Troopers. Not resting on his legacy, he continued his public service for over 30 years representing the 5th Congressional District in Georgia.

“The Conscious of United States Congress”, Rep. Lewis was never afraid to remind the nation of its past and its potential.  A tireless advocate, Rep. Lewis maintained his voting rights advocacy through the Voter Empowerment Act.  He also was instrumental in the creation of the National Museum of African-American History and Culture.  Regardless of his larger than life stature, his commitment to the philosophy of nonviolence remained at his core.  Despite over 40 arrests, Rep. Lewis was steadfast in inspiring everyone, young and old, to understand their moral obligation to fight for what is right and just in the world. Additional honors bestowed to him include:

I am humbled to know that by the grace of God, Rep. Lewis was able to experience some of the fruits of his arduous labor.  With the scars to remind us of his selfless sacrifice, we must all channel his resolve to fight against the continuous threats to the Voting Rights Advancement Act and other injustices across the country. I am guided by his famous words – that our vote is precious and the most powerful nonviolent tool we have.  We must get into “good trouble, necessary trouble” to push forward towards a more perfect union.

May he rest in power.